Am/Can/Aust Ch Graytsky's Smokin In Havanna/Ch Carnmellis Zafirah
Doug started his show career at three months winning Best Baby In Show at the Weimaraner Specialty.
From there he has continued to do well winning Best of Groups, Reserve of Groups and age wins In Show.
Doug is an extremely loveable boy - really a bit of a "dick". One thing that he loves to do is stand with his front paws on your shoulders and survey the scenery.

Prior to being exported to England I started him on field work and he was coming along well.  He has a love of retrieving either on land or water.  One of his water photos is at the top of the page.

On the 6th January 2011, Doug flew out to England where he joined the Gunalt team.  Doug is living with Richard and Ed of Farnfield Gundogs in Wales.  Richard owns the top winning Labrador Bitch for 2010. Since joining Richard and Ed, Doug has enjoyed life on the couch.

At an Open show he won Best of Group (Group1) under Marian Waddell (Magregor Weimaraners) Scotland.   Sometime after awarding Doug this award Marian used him on one of her bitches and they produced 11 puppies.  These puppies commenced their show career the first w/e in October 2011 at the Scottish Weimaraner Club Open Show where they won 1st, 2nd and 3rd.  From winning the Minor Puppy Dog Class, Zed also won Best Dog and Reserve In Show to his mother.

We look forward to hearing more results as they come to hand, now that the shows are mainly being held outdoors.

22 May 2011 Scottish Kennel Club Doug wins his first Dog CC and Best of Breed under Mrs M Mackay.
Critique: A medium sized dog so well balanced.  Loved the head and expression, clean true front with correctly placed shoulders, good width of chest, plenty of heart room, well ribbed up, strength in backend, covered the ground on an even length.

28 May 2011 Bath Kennel Club Doug wins his second Dog CC, Best of Breed under Mrs J J Wright.
Critique: Everything I was looking for in this dog.  Good front, spring of rib, nicely angulated strong quarters hence his wonderful drive on the move.  He just sails round the ring, looking the part.

7th October 2011 South Wales Kennel Club Doug wins his seventh Dog CC and BOB under Prof David Brigden.
Critique: Tremendous ring presence and a pleasure to go over.  Aristocratic head, good clean neck and front.  Excellent top line and rear angulation.  Expertly presented and handled getting the best from him on the move.  No hesitation in awarding first in this class, Dog CC and Best of Breed.  Heartiest congratulations on the Group 1 win thereafter.

7th October 2011 South Wales Kennel Club Doug wins Group 1 Under Mrs Feredith Somerford.
Critique: G1 was the Weimaraner Show Ch/NZ Ch Carnmellis Hot Dikkety Dog At Gunalt, who was in wonderful condition and sparkled in every way.  He pleased for size, shape and balance and moved very well carrying and using his tail perfectly.  Has everything to like. 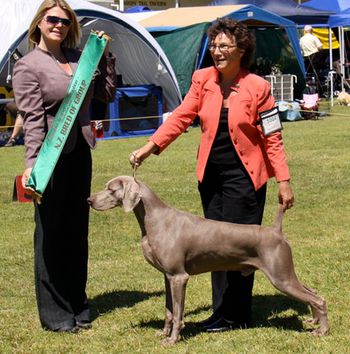 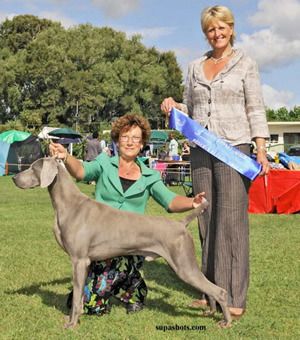 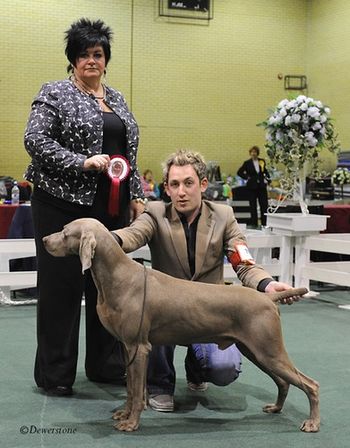 Best of Group (Group 1) in Cardiff 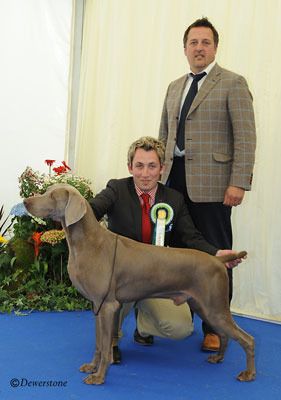 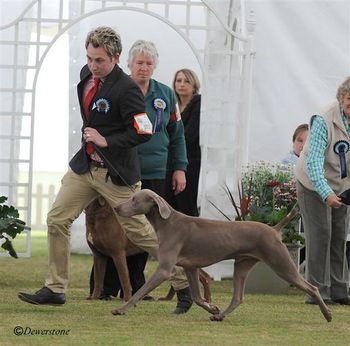 Doug and Ed being run for Best of Group at Bath Kennel Club, England. 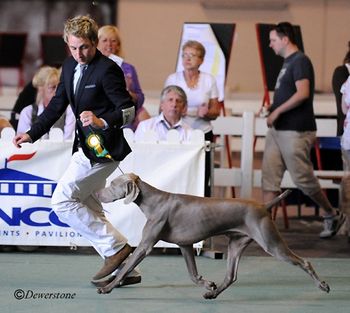 Doug and Ed being run for Best of Group at Paignton Kennel Club, England 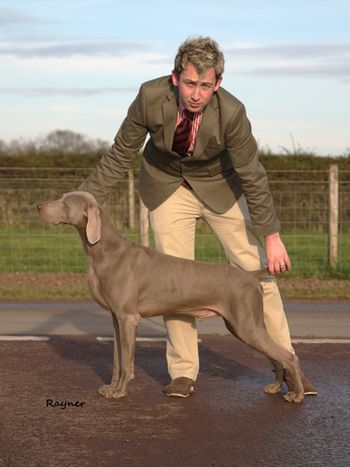 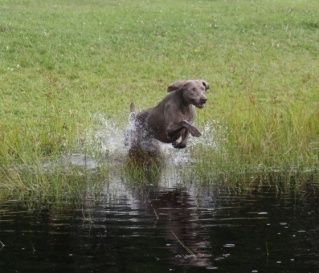 Doing what he loves - retrieving 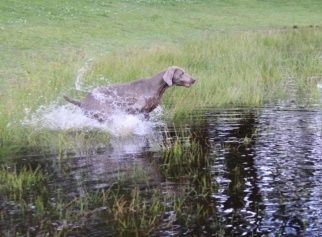 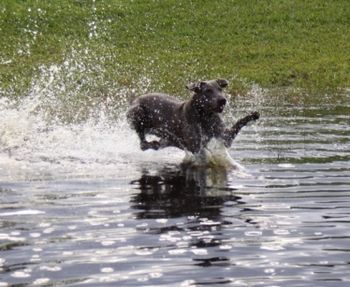 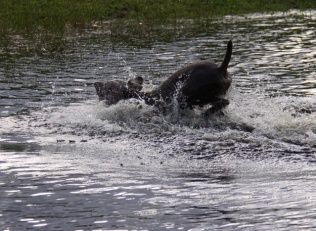 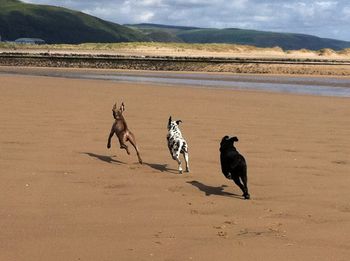 Doug, Dillon & Olly at the beach in the UK 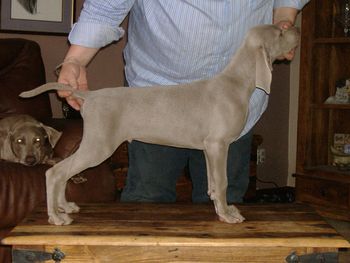 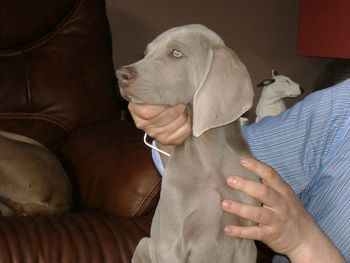 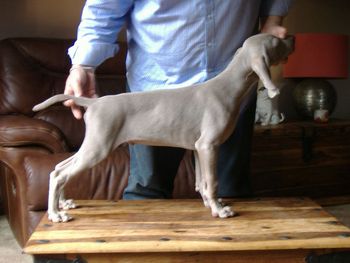 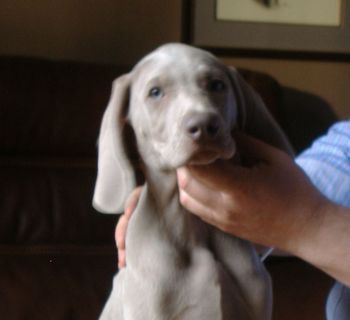 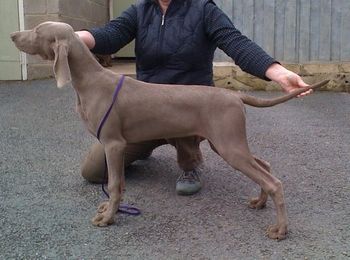 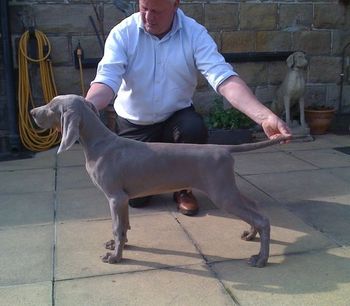 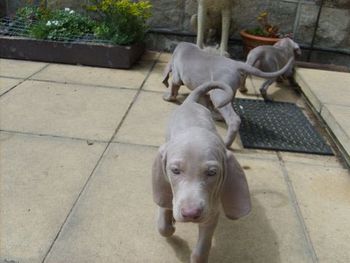 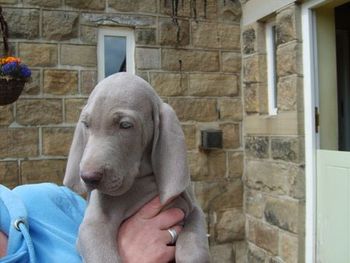 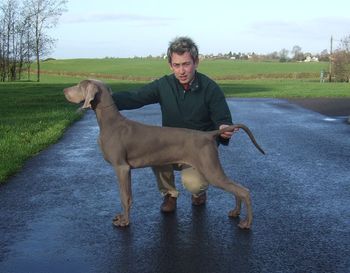 Gunalt Limitless of Braithwait at 6 months 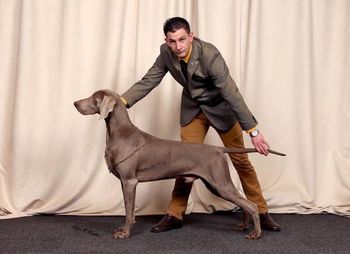 Gunalt Limitless of Braithwait just over 12 months. Hips A. 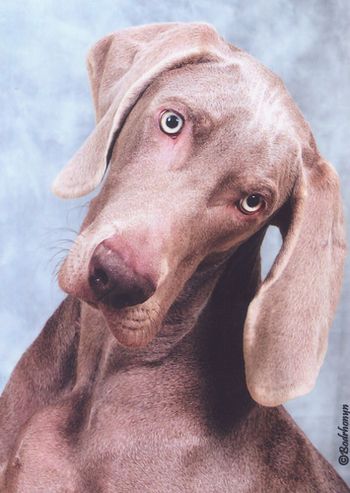 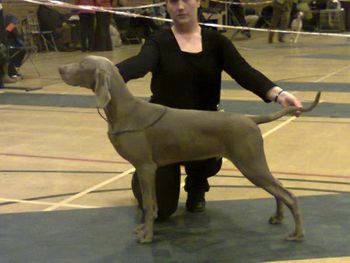 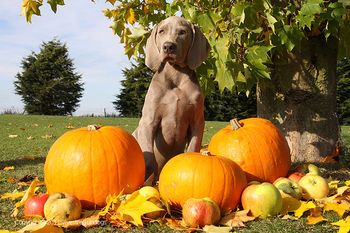